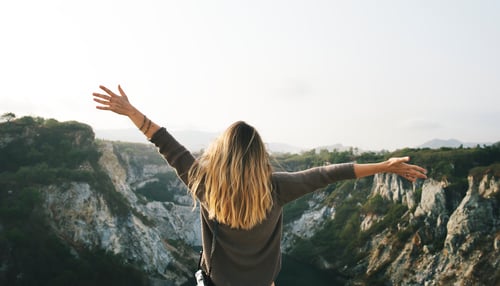 ** If struggle with self-injury, this post might be triggering. Please read with caution or don’t read at all. Your mental health is what’s most important. **

This is something I never talk about when it comes to my mental health. There’s already a huge stigma surrounding mental illness, and self-injury is stigmatized even further. Oh, and self-injury in adults? Even worse. But stigma and shame grow in silence, and I don’t want to live like that anymore. So here goes nothing.

About two years ago, in June 2017, I relapsed after 10 years clean from self-injury.

I started self-harming when I was 13 after reading about it online. I was severely depressed and anxious, and I had no other way to cope. It led to a lot of bullying in middle and high school, which of course, only made things worse. I didn’t know any other way to cope, so I continued to self-harm.

But on May 7, 2007 – at the age of 17 – I cut myself for the last time. Every month, I celebrated being clean. I was genuinely so proud of myself. And eventually, months turned into years, which turned into a decade.

And during that decade, I lived a pretty normal life. I was happy and confident and felt good about life. It felt like that whole world was behind me. I was really anxious in grad school (although I didn’t immediately realize what I was experiencing was anxiety), but it subsided after graduating.

However, around April 2017, my depression and anxiety came back in full force. I started seeing a psychiatrist in June – behind my ex-husband’s back. The only person who knew at the time was my boss. I had hope that things would get better. But the medication gave me the worst side effects I’ve ever experienced in my life.

Everything was spiraling downward, so I eventually told my ex-husband what was going on, and he wasn’t supportive or understanding. He didn’t want me seeing a psychiatrist. He wanted me to go to therapy. I felt lost and confused. I didn’t know what to do.

So, I did the only thing I did know how to do – which was go back to my destructive, teenage coping mechanisms. And so, I relapsed. In that moment, all the emotional pain I was feeling went away. It was instantaneous. I felt better…until I didn’t. Rather quickly, the intensity and anxiety of what I did set in.

I had to hide what I was doing from my ex-husband, family, boss, coworkers, friends and even strangers. It was overwhelming. But it didn’t stop me. At first, I didn’t even try to stop. When I eventually did try to get clean, I’d stop for a month or two, and then I’d relapse. And with every relapse came more shame, guilt and embarrassment.

Right before I went to Boston for a conference, after several months clean, I relapsed again. It was one of my worst relapses. I won’t go into the details as to why – both to protect myself and to not make this post more triggering than it already is. But it was bad. And to make matters worse, the next morning I got on a flight to Boston, met up with a coworker and my boss at our Airbnb, and tried to act like nothing was wrong.

But everything was wrong. And within hours, I was having a complete breakdown. I wanted to self-harm. The urges were so overwhelming that I had a panic attack. I didn’t want to live. I just wanted to walk in front of a bus or a train and end it all. I was at one of my lowest points. In that moment, I was completely falling apart. And two people who I consider friends were there to see it happen. They did their best to comfort me, and I’m glad I wasn’t alone. But it wasn’t their job to pick up the pieces.

The shame, humiliation and guilt of that night (and the following days) was rough. It weighed on me for weeks. And I told myself that if I couldn’t get clean for myself, I would do it for them. Because I never wanted what happened in Boston to ever happen again. I had to stop. I was going to stop. For them.

But not surprisingly, four and a half months later, I relapsed.

I wish I could say it was an instant regret, but for the first time in two years, self-harm brought me relief. It took away the overwhelming pain I was feeling. I was truly scared that this wasn’t going to be the last time. I was convinced it was only the beginning of another downward spiral.

As I talked about it with my therapist, I realized I couldn’t go down that road again. I was ashamed, embarrassed, alone and scared. I felt broken. Something had to change. I knew that if I was going to get clean, I had to do it for myself. Not for my coworker or boss or friends. But for me.

Truth is, I didn’t want to get clean. I didn’t feel like I deserved it. I felt like I was meant to be broken forever. I felt like I didn’t even deserve to live. I felt unlovable and unwanted. And honestly, what good was I doing by staying alive? What did I give to this world that someone else couldn’t give? What about my life mattered?

So, instead of setting out on this journey to get clean, I decided to take it day by day.

When I want to self-destruct, I use the skills I learned in treatment and try to show myself kindness and compassion. Because I have to believe I deserve that too.

I can’t promise this will be forever. What I can promise is that I will do the best I can every single day. I will use my skills when things get tough. I will talk to my therapist and let her help me when I don’t know what else to do. I will reach out for help and accept help from others. I will believe others when they tell me they love me or care about me or that I make the world a better place.

But mostly, I will continue to take it one day at a time. I will do this for me. And I will remind myself every day that I deserve to get better – because despite what my brain tells me, I am enough. My life matters. And I am loved.